Compagnie Off's latest creation, this dramatic, choreographic and musical adaptation of «I Pagliacci» was born in October 2011 within the Béthune 2011, Capitale Régionale de la Culture event, and presents a surreal, extreme and contemporary rewriting of Leoncavallo's masterpiece. 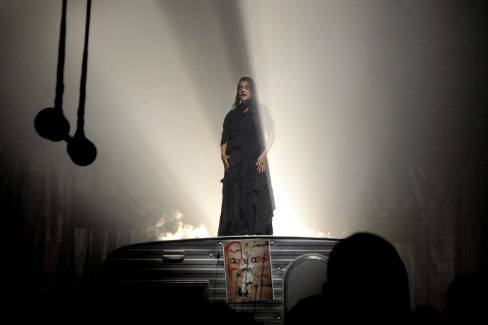 « Pagliacci ! » is an extreme rewriting of Leoncavallo’s opera, yet faithful to its thematic core. Under a disjointed Big Top, sweat and blood reign supreme and fuel the endless conflict between men and women, opposing them to the extreme or uniting them in total fusion. These characters, hot-blooded and moody, know an everyday life of matter and frailty. They speak up loud, their head up high and their sense of drama always on display.

In a fifties-inspired Technicolor universe, the fundamental operatic quality of “I Pagliacci” is highlighted by a contemporary musical approach. Fellini’s onirism and Jodorowsky’s cruelty both strongly influence the overall direction, and the surrealism of several scenes. From verism to ultra-realism, the image is set to burst out of the screen.

“Pagliacci!” is an attempt at squaring the circle: four characters at the heart of an eternal story, the cycle / circus of perpetual passions.

Nedda / Colombina, the unfaithful wife, with a heart split in two

Canio / Pagliacco, the deceived husband with a jealous temper

Silvio / Arlequino, the irresistible lover with a poisonous charm

Tonio / Taddeo, the forlorn lover with a frustrated soul

Four bleeding hearts trapped by their own outspoken feelings…

The scene is set several years after the original story, as Nedda’s daughter just replaced her mother at head of the clique. On a circular ring set within four masts, the tragedy unfolds through flash-backs, fed by the confusion between past and present, fantasy and reality.

"I Pagliacci" (The Clowns in Italian) is an opera in two acts by Ruggero Leoncavallo, created May 21, 1892 in Milan. This is the story of a passion, a story of love and death. Made famous by the masterful "mise en abime" of its dramatic action, the opera was celebrated at its inception as one of the first Verismo operas, a genre inspired by actual events, and of which "Carmen" by Georges Bizet was to become the most famous work.

Canio: The director with a anguine temperamenta, a jealous and deceived husband

Nedda: Wife of Canio, whose fickle heart is torn, and who dreams of escaping with her lover Silvio

Silvio: A man from the village, Nedda's lover, who wants to persuade her to run away with him

Tonio: The clown, deformed and tortured, secretly in love with Nedda

ACT  I
A troupe of performers arrives in a small Italian village. Canio announces the evening's performance as the villagers cheer and clap. They then go the the inn for a drink, except Tonio, who remains behind to secretly court Nedda. A villager insinuates that Tonio is in love with Nedda. Canio does not appreciate the joke and says the man who would attempt to steal his wife would be mad. Nedda, alone, ponders the words of her husband. Tonio appears, and starts to declare his love. She teases him, but he insists, increasingly brutal. She ends up hitting him with a whip, and Tonio leaves, muttering about vengeance ...
Appears Silvio, Nedda's lover. He begs her to elope with after the evening show, but Nedda hesitates. She fears the wrath of Canio. Tonio, bruised and bitter, has been spying all along, and goes to Canio to denounce his wife. When they arrive on the scene, Silvio barely escapes, and Nedda denies everything. Canio loses his temper violently, but show time is near, he will have to postpone his anger. It's time to put on the makeup and costume of Pagliacco ...

ACTE  II
The public is here, the show is about to begin. The play reflects in an ironic and cruel way the reality experienced a few minutes earlier: Canio plays Pagliacco the cuckolded husband, Nedda is Columbine, the adulterous woman dining with her lover Harlequin, and Tonio is Taddeo, the fool.
Pagliacco catches Columbine and Harlequin, played by an actor of the troupe, but the resemblance to his real despair is too great, and Canio gradually finds it more and more difficult to stay in character. Nedda tries somehow to persuade the public that all this is part of the act, but Canio becomes increasingly violent. He eventually gives up his character, and orders Nedda to tell him the name of her lover, and threatens to kill her if she doesn't. The audience cheers, delighted with the realism of the acting... But Canio, mad with rage and grief at the refusal of Nedda to confess her treachery, seizes a knife and stabbs her. In a last breath, she calles her lover, Silvio. He rushed to the stage, but is received by a second stab of Canio.
Canio / Pagliacco turns to the horrified audience, and announces that "La commedia e finita ..."

In 2011, Company Off presents an extreme rereading - though faithful in spirit - of this work. Nedda is dead and our story begins ... In a world in technicolor borrowed from the American fifties and Italian cinema, the daughter of Nedda has taken over the role of her mother within the troupe.

Canio, who has never really recovered from the murder of his wife, is struggling to put together a new show. The young Tonio is staying true to the perversity of his predecessor. Silvio, the great seducer, behind his cheeky ease, hints at the soul of the wounded White Clown...

In the visions of intoxicated Canio, past and present will blur, reality and fiction blend, the dead and the living meet. After all, is the audience in front of, or behind the curtain...?

Opera in two acts under a Big Top. Dramatic, choreographic and musical adaptation of Ruggero Leoncavallo’s “I Pagliacci” (1892).

Capacity: 350. Possible ticketing by the organisation, both prior to the show and on site. Pricing and conditions to be set on agreement with the company.

Frequency: Two performances a day, with a minimum of two days. Foresee a break  in case of more than two days of performing.

D-4: arrival of technical team and sets; beginning of set-up

D+2: Dismantling of the Big Top

D+3: End of dismantling, departure of the technical team and sets

" A delightfully multi-aesthetic creation, Philippe Freslon's new show is a free and inventive take on Leoncavallo's opera. All the ingredients of Opera are featured: beautiful voices, an ever-present music ranging from all-out lyrical to eccentric intensity. Over all this hovers the dust of the Cirucs, along with the power of theatre and moments of pure choreography. "
Atualité de la Scénographie, October 2012

" Pagliacci has never worn the fairground colours so aptly, under Philippe Freslon veteran direction. From outside the Big Top, the mood is set: American car, cowboy hat, fringed blazer – the United States and its vast spaces will be the set for this Verismo Italian drama. The music is tackled the same way, with rock and latino accents revisiting the score, giving it unexpected scope, always in sync with the overall stage direction. Under the canopy, space management is remarkable, as the audience is moved around as an inebriated Canio struggles to drive his pick-up truck, or a plane driven by lover Silvio tries to steal away Nedda. Compagnie Off fully respects the original work, while giving it a full-on fairground treatment. A breathtaking, extremely well-thought tribute.”
Floriane Gaber, September 2012

" A canvas of life, the Artist is but a Man: this paradox lies at the heart of Pagliacci. It sees the Opera taking in the Circus, the burlesque, and rock music, ending up in a expert mix of genres which takes the audience throughout centuries and arts.”
La Montagne, 22/08/2012

“ …the audience pulses inside a set where everything moves, intoxicated by the whirlwind of images, sounds, comedians, acrobats and singers. A grand, beautiful show, stacked with intense moments of emotions and extraordinary creation, which leave a mark on the audience and its time. “
CitizenSide, 21/08/2012

“ Enthralling “Pagliacci” ! When Compagnie Off flirts with its first love, it ends up with a story that combines all the elements of tragedy: passion, vengeance, murder, which Philippe Freslon pushed to their very boundaries. And it’s well worth the look: an offbeat, inspired offering, a 50’s inspired universe, a gripping soundtrack, formidable actors and overflowing energy.
The interpretation is supra-sensual, blood and sweat are ever present and seize the audience by the throat. The characters are set at the very heart of the ongoing drama, and the jukebox spits out a live music accompanied by the roaring of engines. Bodies collide, attract and repulse each other. The audience is literally thrown inside the story. Of course, the Opera is there, but the adaptation by Angélique Cormier and Sylvestre Perrusson reinvents the originla work. Their score is like a movie soundtrack, both warm and chilling, soaked in fifties themes, Tom Waits and so much more…
“Pagliacci!” has engrossed the lucky people who happened to venture inside this Big Top. For more than an hour, they were taken into this story of blood and love, propelled inside this moist, hot universe halfway between human comedy and tragedy. A real slap in the face, that leaves no one immune to emotion. “

“ Compagnie Off has jostled all of the Opera's codes: unsettling, offbeat, daring, this new “Pagliacci” is like a lyrical UFO. In there, the audience is standing up, both feet in sawdust, and can applaude, move, talk or even have a drink at the mobile bar. Philippe Freslon – this most deliciously kooky of directors- takes the audience by the hand and brings them at a crossroad of arts. “

“ A spectacular Street Pagliacci ! Whether or not you are familiar with the original work by Leoncavallo, you’ll be in for many surprises: the rousing arrival of Canio’s troupe jumping out of a beautiful Thunderbird, Canio himself in cow-boys hat in his pick-up truck… The three lyrical artists show off tremendous vocal and dramatic presence in this production by Compagnie Off. For an hour, you’ll feel the charm, the tension, the beating heart – all of those emotions that make the Opera what it is. “

“ Fantasy and extravagance… Under the Big Top, Nedda, Canio, Silvio and Tonio live life to the fullest and chase love and its many chances. A re-reading of Leoncavallo’s masterpiece that purposely turns its back to idealism in favor of realism and a greater psychological study of its characters. “